Why We Love Dolly Parton
(and Not Jeff Bezos)

From Third Street Books, McMinnville, OR: A few weeks ago, Jeff Bezos and three other humans flew into space for a brief moment. Much was made of this event. A few days later, a report was released here that addresses Amazon’s share of the book market. It was sobering, to say the least (more on this below).

I try to keep my anti-Amazon tirades to a minimum. I recognize that everyone has the right to spend their money wherever (and however) they want. Because I cannot see the logic of spending a gazillion dollars to spend a few seconds in near space, doesn’t mean there isn’t some kind of intrinsic value hidden in the experience. I don’t get it, but that’s fine.

People get to do whatever they want with their hard earned money. It’s unfortunate some people are so tone deaf they rub their gluttony (and complete lack of self-awareness) in everyone’s face. I am grateful for people like Dolly Parton, who see the value of sharing their wealth to benefit a large segment of society. Vision and grace are fine qualities, ones I wish more folks had (myself included).

These last sixteen months have afforded lots of folks a new perspective. People are re-evaluating expectations. Life/Work balance. Do I get the French fries or the salad? (Both!). I hope people are looking at their lives and prioritizing what makes them feel good. Shopping in my local stores makes me feel good. Eating at my favorite local restaurants makes me feel good. Connecting with my community through a variety of engaging ways (from volunteering to just hanging out) makes me feel good. And these actions have multiple positive results! I feel good AND I am helping other people. WIN WIN WIN! Also, no booksellers at Third Street Books have any plans to go to space. Even if we could afford it. 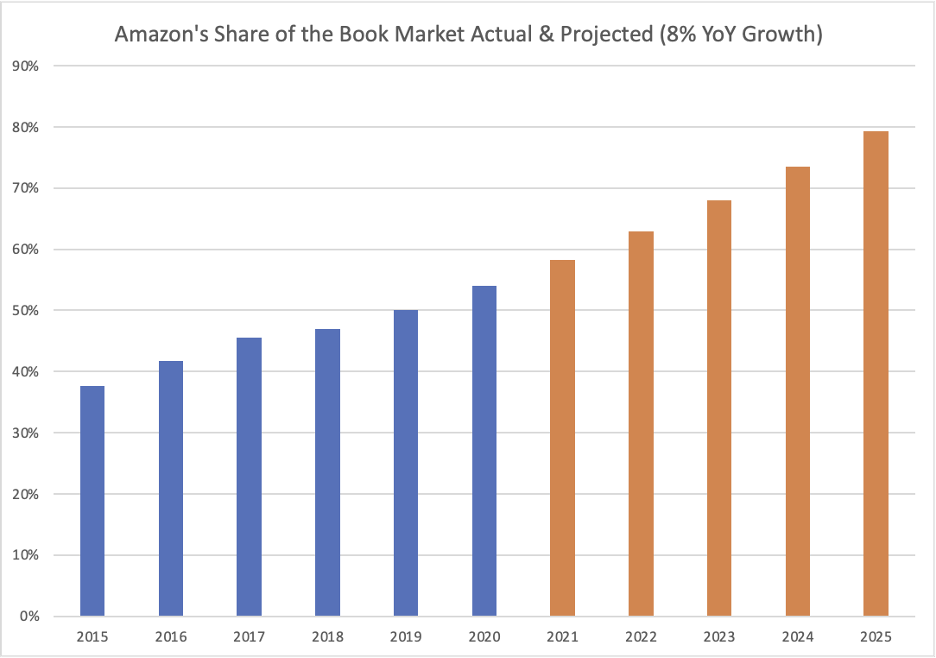 Why Amazon’s share of the book market matters to you.

Buying books online instead of in a local bookstore is a solid way to negatively affect the book industry. By doing this, people are giving Amazon more than dollars. They are giving Amazon power. Amazon is not using this power for good. They are not interested in stocking that debut title by the young, queer author. They don’t think about all the people in their community who love mushroom books as they are ordering books for the fall season (we do, and I have some great ones coming in!). They think about dollars.<

Don’t get me wrong – we think about dollars too! But we also think about choice. When there is only one major sales outlet, they have an unhealthy influence on the producers of whatever product is for sale. If Third Street Books only sold best sellers, even in multiple categories, we’d be the most boring store out there. And you would suffer. When one company is a monopoly (or at least it seems like that is Amazon’s goal), the consumer looses out. And with regards to the written word, I would say society, nay, humanity misses out.

One way to support independent bookstores is to preorder books with them– like Dolly Parton’s debut novel, coming next spring!