This adventurous historical fiction romp could well be this generation’s successor to Karen Cushman’s Catherine, Called Birdie, but its deep dive into the complicated dynamics of friendship should also make it a surefire hit with fans of Raina Telgemeier or Shannon Hale and LeUyen Pham’s Real Friends. Meconis’s threaded needle piercing the last page suggests she might return and embroider further chapters of Margaret’s adventures. Graceful and passionate, Queen of the Sea is destined to become queen of hearts. –Jaclyn Fulwood 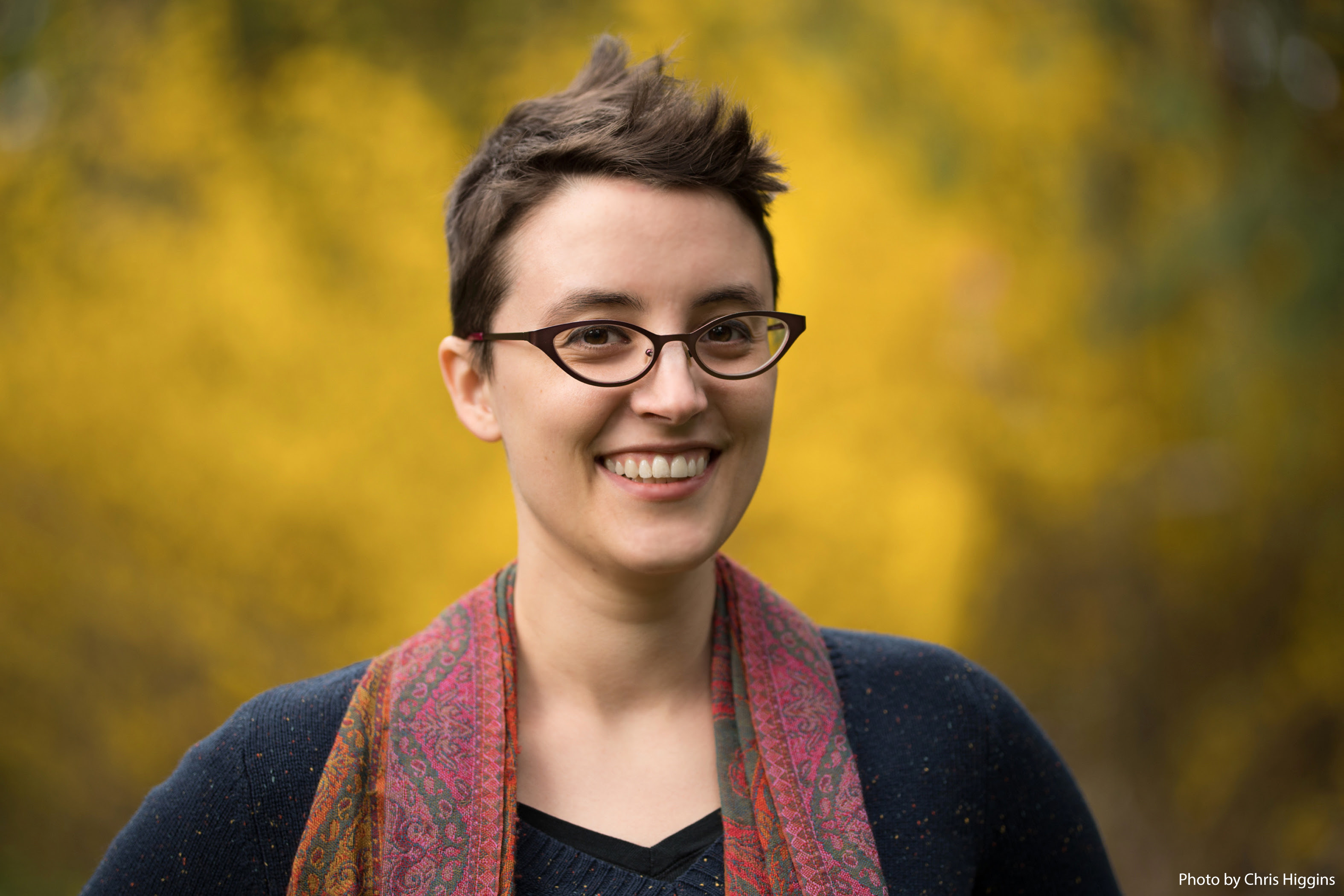 Dylan Meconis is a cartoonist, writer and illustrator who created the graphic novels Family Man, Bite Me! and Outfoxed, which was nominated for a Will Eisner Comic Industry Award. She lives with her wife in Portland, OR.

What was the inspiration for Queen of the Sea?

This book has several points of origin, both personal and historical. When I was the same age as the protagonist, Margaret, my family spent a lot of weekends and vacations in a tiny, unincorporated beach town out on the Washington coastal peninsula. As an only child, that meant many hours to myself, exploring the shoreline and the backwoods, or holing up with a book, writing project or drawing pad, so there is a great deal of me in Margaret.

In terms of the historical setting, I was enjoying the work of Terry Jones and Lucy Worsley when I first started developing this story. They’ve both created popular history work that explores the daily lives of people in the late medieval and Renaissance eras, and does it in a way that is bright, lively and humane. It’s an invitation to curiosity rather than a lecture, and explores themes and personal experiences more than Dates of Battles and Important Documents. I wanted to capture some of that for a young audience.

I also realized there is no shortage of expertly researched and beautifully executed fictional takes on Tudor history. I didn’t feel like I had anything special to add there, at least not in a way that felt responsible and respectful of the real people whose lives I’d be fiddling with. Instead I picked out all the “good stuff”–settings, premises and a few relationships and personalities–and built around it.

What was your research process for learning about daily life in this time period?

I live in Portland, Oregon, where we’re blessed with a remarkable public library system. I made appointments with research librarians who helped me track down academic articles in online databases, digitized versions of out-of-print books and material from the stacks. Because the convent on the Island is so isolated, and the residents have such simple needs, I could draw on details of daily life from a broader swath of history than just the Tudor era–some of the things the nuns do, like using sign language at meals, are holdovers from centuries past!

I also have to give so much credit to the authors, costume historians and sundry other nerds who compile their own research findings online for the benefit of the masses. Details like “how should a commoner address an earl” and “what games did children play” or “what’s actually in gruel” are so much easier to find now than they were in the past, with complete bibliographical sourcing, too.

What do you feel Queen of the Sea has to say about the lives of 16th-century women?

While it was a society that massively privileged men in public life, women of all stations led full, complex and influential lives. In history class we hear all about how men related to each other, but women had their own vibrant inner society as well. We just don’t hear about it, or we hear about the “exceptions” like Elizabeth.

Are there greater inherent challenges in writing for young readers than adult readers?

Writing for young audiences requires me to be honest and vulnerable in ways that adult fiction doesn’t. For grownups, I can sort of stash my tender feelings under a protective coating of Theme and Imagery and Subtext, or technical stunts and referential humor. Children’s literature has those things, too, but your heart has to be right in the middle of the plate. The practical stakes of many children’s stories may seem low to grownups, but the emotional stakes are always, always high.

On the plus side, I know that no pun is too terrible to include.

What the more prose-heavy sections allowed me to do was condense some of the stories-within-a-story, and to deliver exposition or sum up less eventful stretches of time in ways that were more fun than a block o’ text but still more efficient than a comics version would be. I intentionally kept the panels-per-page ratio very low in the comics sections, knowing that if I ever felt something had to be more densely packed, I had other options.

How did you create your digital illustrations, and how were the embroidery thread details inserted?

I drew all the initial rough art digitally, using a Wacom Cintiq tablet and a comics-specific illustration program called ClipStudio Paint. For the comics sections and most of the graphics and spreads, I would print out those pages and, using a lightbox, trace the lines onto watercolor paper with an oil-base pencil, then color them with watercolor paints, and firm up small details with colored pencils.

For the embroidery, I drew some designs, and then my friend, comic artist and crafter extraordinaire Erika Moen, translated them into actual stitching for me. I suggested stitches to use in a few spots, but otherwise told her to interpret however she saw fit. Then I digitally scanned the resulting embroidery and cleaned it up in Photoshop so I could drop it all seamlessly onto the final digitized spreads. I also used digital trickery to recolor the floss so it would fit my color scheme.

Can we expect a Queen of the Sea sequel?

I have several top-secret projects on the boil, both my own work and in collaboration, and I’m excited to say that almost all of them are aimed at young readers. As for a sequel, I certainly hope so. I do know what happens next, and Margaret certainly has more to say. —Jaclyn Fulwood

One response to “Portland Author Pens “Queen of the Sea””