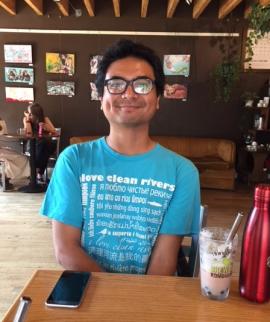 Good books have long been a part of Earl Dizon’s life: “When I was really young I was reading an Agatha Christie mystery at the library and forgot to go home that evening. Luckily, my stepfather thought to check there to find me.”

Earl’s early love of literature set the tone for a lifelong pursuit of literacy volunteerism. Since moving to Portland in 2008 he has been a search assistant at three MCL locations, a board member for Friends of the Library, and he currently volunteers with Every Child Initiative, an outreach program providing books to low-income families, as well as readers and literary materials for pre-Kindergarten children.

Growing up in the Philippines, Earl first read Agatha Christie novels and the Encyclopedia Brown series, which inspired him to want to become a detective. After reading Christopher Pike’s Remember Me trilogy, though, “I closed the book and said ‘I want to write, I want to make people feel the way I feel when I finish a book like this,” he says. He currently has four picture book manuscripts in the works and blogs about children’s books at The Chronicles of a Children’s Book Writer. He says he wants to write books that reflect his experiences as an immigrant and as a gay man. “We need books that represent ourselves, books where we can see ourselves,” he says. On Earl’s first day in Portland he came to the Central Library and used its computer lab find an apartment. He later took citizenship classes at the library, so he sees his volunteerism as an act of gratitude for a system that has helped him along the way. “I get so much joy from volunteering,” he says with a smile.

In addition to his voracious library work, Earl also promotes literacy as a bookseller at Green Bean Books on Alberta, where he’s worked for the past six years. “I love being a bookseller. If I can get kids excited to read at a young age, that’s my purpose.” He enjoys the clientele at the shop, all of whom are book enthusiasts. “I love being a part of this community of writers and readers. The more you read, the kinder you are, and we need more of that in the world.” With the work that Earl does for Every Child and Green Bean Books, it’s easy to see how young readers are made: one children’s book at a time! A few facts about Earl

Home library: Central. “It was my first Portland library.”

Currently reading: Just finished Agatha Christie’s The Witness for the Prosecution and Other Stories and I’ll Get There. It Better Be Worth the Trip by John Donovan, one of the earliest LGBTQ YA novels.

Most influential book: Christopher Pike’s Remember Me trilogy. “They made me want to be a writer.”

Favorite book from childhood: Letters to a Young Poet by Rainer Maria Rilke. “I get something different every time I read it.”

Guilty pleasure: YouTube. “I always think I could be productive if I wasn’t watching funny ‘Golden Girls’ moments on YouTube.”

Favorite place to read: A shady tree on the deck in front of Green Bean Books.

E-reader or paper? Paper! But second favorite is audiobook: “It gives me incentive to walk. Once a book was so good I kept walking and when it ended I didn’t know where I was.” Green Bean Books hosted a therapy llama on St. Patrick’s Day, and I think that (like almost everyone) the llama felt like Earl’s close friend by the end of the visit.